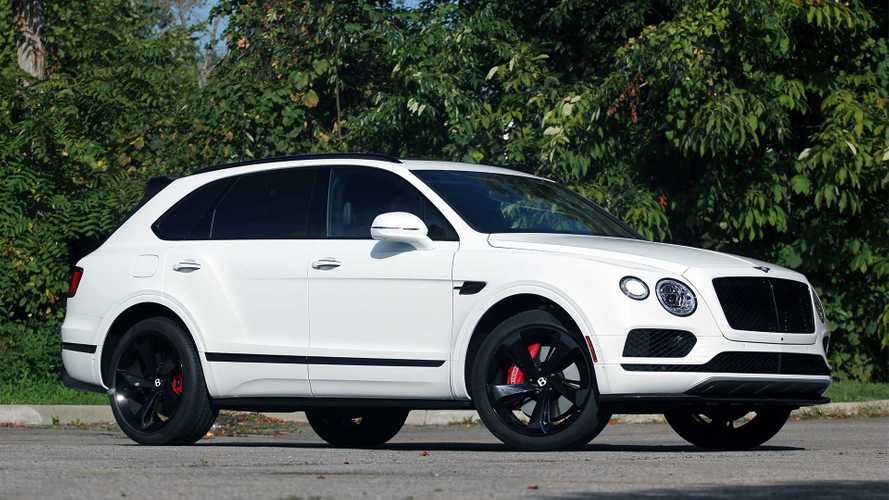 This Flying B is downright approachable.

Automakers are rushing to fill their lineups with SUVs of every ilk and size, and uber-premium Bentley is no exception. The Bentayga arrived to market more than a year ago with the brand’s familiar and opulent W12 engine as its sole powertrain, but has since been joined by this, the V8 model. It features an ostensibly more conservative and responsible approach to motivation than the swank 12-cylinder.

But the V8 is nothing like what its lower cylinder count suggests, and in fact gives you nine-tenths of the W12’s power, grunt, and chutzpah in a package that’s considerably less expensive and more efficient. In fact, the Bentayga V8 has the lowest starting price of any Bentley, and it’s more fuel efficient than the W12-powered versions of the Mulsanne and Flying Spur sedans. This, my friends, is the Bentley for the masses.

It’s difficult to judge the price of an ultra-luxury vehicle such as the Bentayga V8. Its starting price of $165,000 is more than most of us make in a year, yet that princely sum is $64,000 less than its 12-cylinder sibling, and it’s the lowest base price of any Bentley you can buy. Amongst its competitive set, which includes other unthinkably expensive SUVs such as the Mercedes-Benz G-Class, Lamborghini Urus, and Rolls-Royce Cullinan, the Bentley’s pricing actually falls in the middle – higher than the more mainstream G-Class but significantly less than the Cullinan’s $300K+ starting price. The Urus, meanwhile, a corporate cousin of the Bentayga, will start at around $200K.

See how the Bentayga performs:

That said, those are all just starting prices; as with any Bentley, the price rises sharply with options. With the Mulliner Driving Specification ($7,395), the Black Specification ($25,800) that adds black-painted and real carbon-fiber trim pieces to the vehicle’s exterior, Naim for Bentley audio system ($8,910), and a litany of other options, my tester’s as-tested price reached $243,325 – far from cheap, but still $80K below the starting price of a Rolls-Royce Cullinan with no options.

When Bentley first showed a concept SUV called the EXP 9F in 2012, its design was universally derided. The brand’s first stab at what a Bentley SUV should look like was a flop. When the production Bentayga arrived as a 2016 model, the EXP 9F’s controversial appearance had given way to a more conservative look. That’s what you see here, and while it’s not incredibly original, the Bentayga does feature the brand’s design language in a way that looks good on an SUV, especially, as we noted in our First Drive, from the rear.

With a huge number of color combinations, trim materials, wheel designs and finishes to choose from, your particular Bentayga, V8 or otherwise, could be stately, sinister, sporty, or any personality you prefer. My tester was decidedly sporty, with an Arctica White exterior color and Black Specification option package that included solid black and real carbon-fiber trim pieces (check out its substantial rear carbon-fiber spoiler). The finishing touch was a set of 22-inch, black-painted, 5-spoke wheels.

The Bentayga’s interior is typical Bentley, with ultra-luxurious finishes and incredibly tight build quality. The design isn’t flashy or avant garde, but neither is it difficult to use, which makes the business of operating the Bentayga as easy as a Ford Explorer. While there are a number of Bentley-specific touches inside, such as classy organ pulls for the vents and real metal door handles, other items come from the Volkswagen Automotive Group parts bin. Bentley’s parent organization provides more mundane parts such as the climate controls and infotainment system, which should look familiar to Audi owners.

In terms of size, the Bentayga fits somewhere in between a two-row midsize and three-row full-size SUV. In fact, you can order interior seating configurations that accommodate four, five, or even seven passengers across either two or three rows of seating. This particular Bentley Bentayga V8 had a five-seat configuration, which offers enough room for a full load of people to fit comfortably. We haven’t had an opportunity to sit in the third row of the seven-seat configuration, but we imagine it would be a tight fit for adults given the Bentayga’s size and shape.

This particular Bentayga V8 was ordered with the $3,780 Front Seat Comfort Specification, which includes heated and cooled front seats, massaging for both seats with six different settings, adjustable cushions and backrest bolsters, winged headrests, and electric seat belt height adjustment. The front thrones are like first-class airline seats, but better because you’re the pilot.

Lastly, the Bentayga’s noise levels are near non-existent. At 80 miles per hour on the highway, the interior is calm and quiet with no wind noise and only a small amount of tire roar. The Bentayga V8’s exhaust note is also a nicely tuned burble, but won’t make its way to your ears unless the windows are open.

The Bentayga’s tech and connectivity chops rise to the level of adequate, which in light of its price, could disappoint some. The infotainment system features a moderately sized eight-inch touchscreen set flush in the dash (not perched on top like many are these days) with physical buttons and knobs on either side for quick access to all areas of the system. The graphics are fine, though a bit dated compared to corporate cousin Audi’s, and the system responds quickly enough to inputs. Apple CarPlay is included, but Android Auto has not reached Bentley vehicles yet – soon we’re told.

There are a couple of interesting tech features worth sharing. My tester included the optional Biometric Secure Storage space in the center armrest, which is an in-car safe with a fingerprint reader on its lid to prevent unauthorized access. Bentley also offers a Night Vision system, which was not included on my tester, that displays a negative view of the road ahead in the LCD screen between the gauges. Rear seat passengers can also get their own pop-out infotainment screen that looks like a chunky iPhone. With it, they can pull up tunes, adjust their climate controls, and poke around the system without bothering the driver.

Bentley lists a number of powertrain options available for the Bentayga. They include the original W12 engine, the new V8, a diesel, and a plug-in hybrid. The reality is that only the W12 and V8 are currently available in the U.S. The diesel-powered Bentayga was canceled following the “Dieselgate” emissions scandal, and the plug-in hybrid model is slated to arrive closer to year’s end.

In terms of handling, the Bentayga V8 benefits from using an air suspension with Bentley Dynamic Ride, and an active roll control system that utilizes a super-fast 48-volt system. The effect is a balance of ride and handling that’s whatever you want it to be, from soft yet stable to firm and sharp. It’s remarkable how air and electronics can imbue a 5,280-pound vehicle with so many different handling characteristics. Bravo, Bentley, and we can’t wait to see this technology put to use on the lighter and more powerful Lamborghini Urus.

And the Bentayga V8 can tow to the tune of 7,716 pounds. Bentley even offers an optional disappearing tow ball that hides behind the rear bumper.

The Bentayga gets generally high marks for the amount of high-tech active and passive safety equipment it offers. That said, much of it is not standard. For instance, one must choose the optional City Specification in order to gain features such as Park Assist with Pedestrian Warning, a top-view camera, traffic sign recognition technology, and a rear-cross-traffic alert system. Likewise, the Touring Specification is required to get adaptive cruise control, head-up display, lane-keep assist, and night vision. Most of these features are offered as standard equipment by brands such as Toyota and Honda, but if you want them on your Bentayga, you’ll pay dearly.

For now, the V8 model is the most fuel-efficient version of the Bentayga you can buy. Efficiency, in this case, is relative, though. For one, the Bentayga V8’s official rating by the Environmental Protection Agency of 14 miles per gallon in the city, 23 on the highway, and 17 combined are only a couple MPGs better than its thirstier 12-cylinder brother. The latter manages to achieve 15 mpg combined. That doesn’t sound like much, but the EPA estimates it costs $2,000 more in fuel costs over five years than the V8 version. Of course, being premium vehicles, both gas-powered Bentayga’s require premium fuel, as well.

If you want a Bentayga that’s legitimately efficient, keep your money earning interest until later this year when the plug-in hybrid version goes on sale. The electrified Bentayga is powered by a smaller V6 engine paired with a battery pack that provides 31 miles of all-electric range. 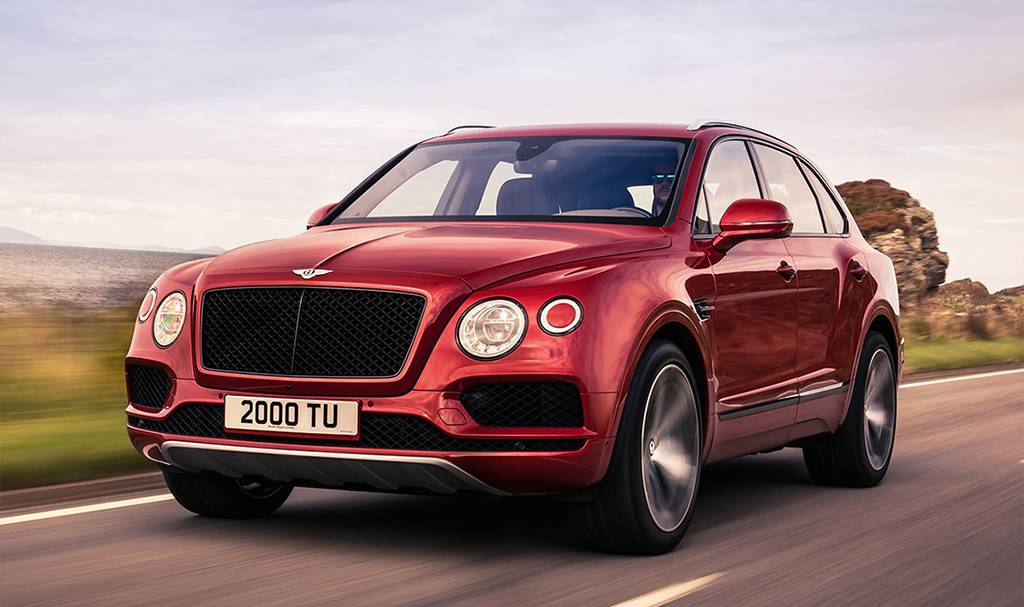 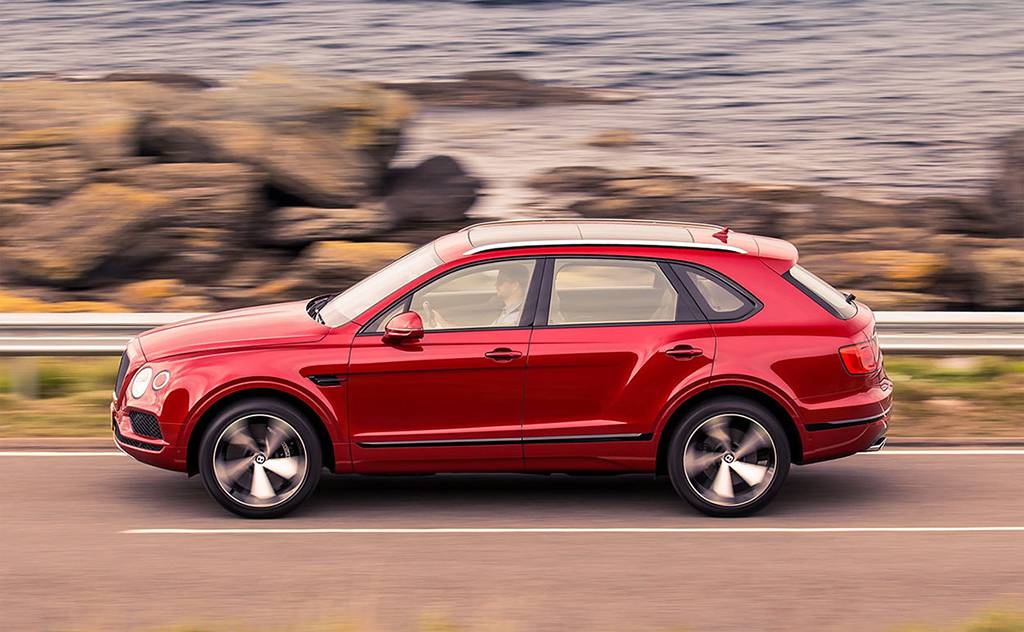 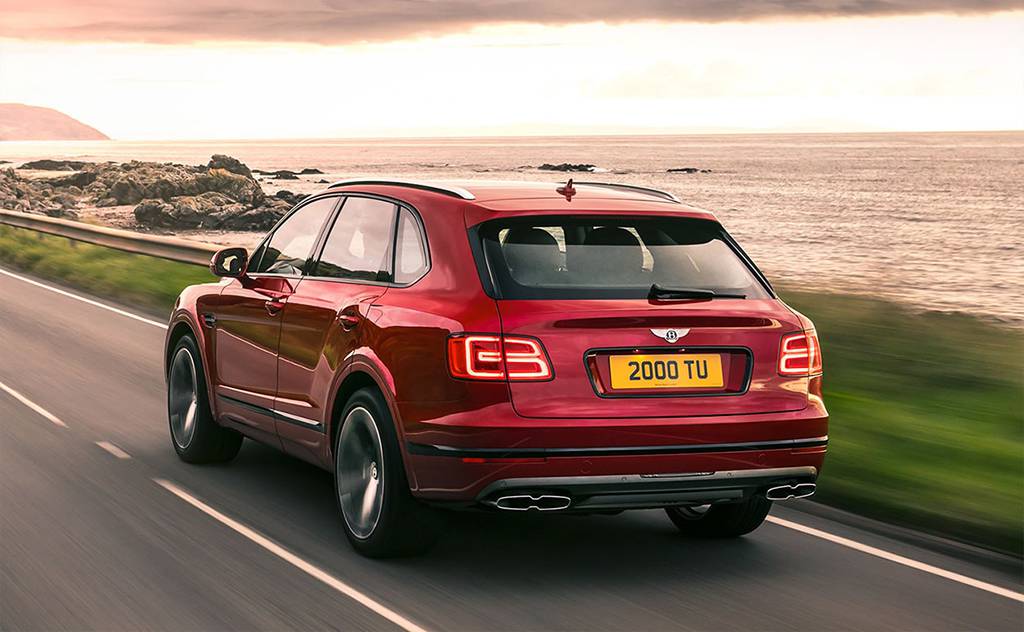 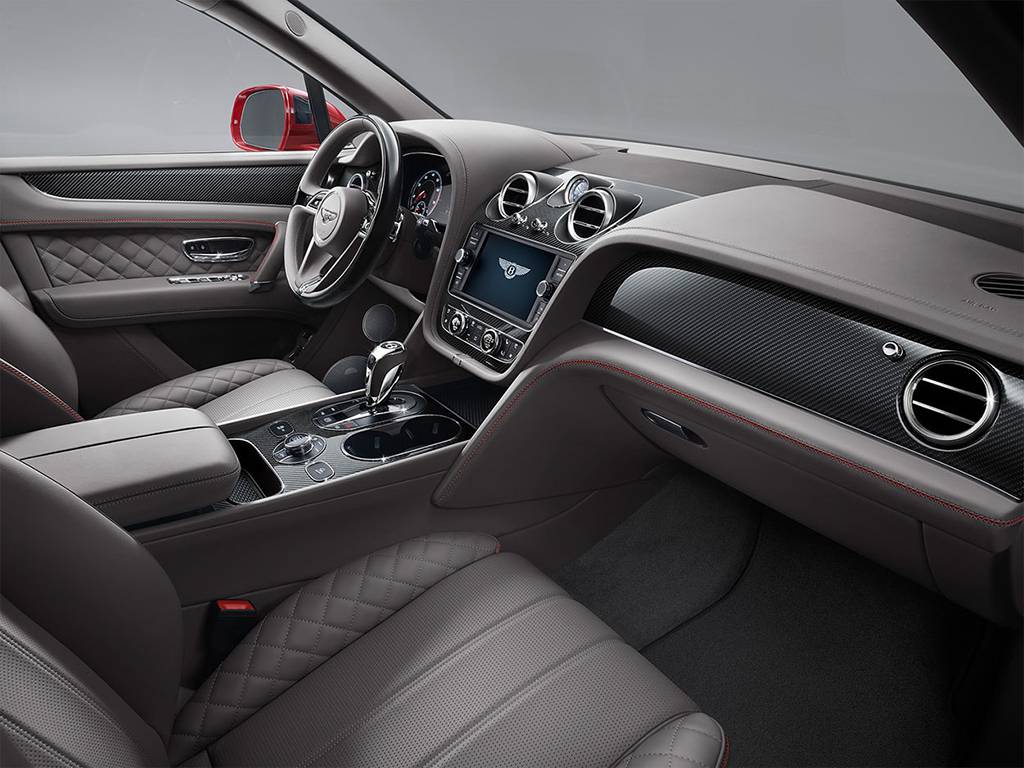 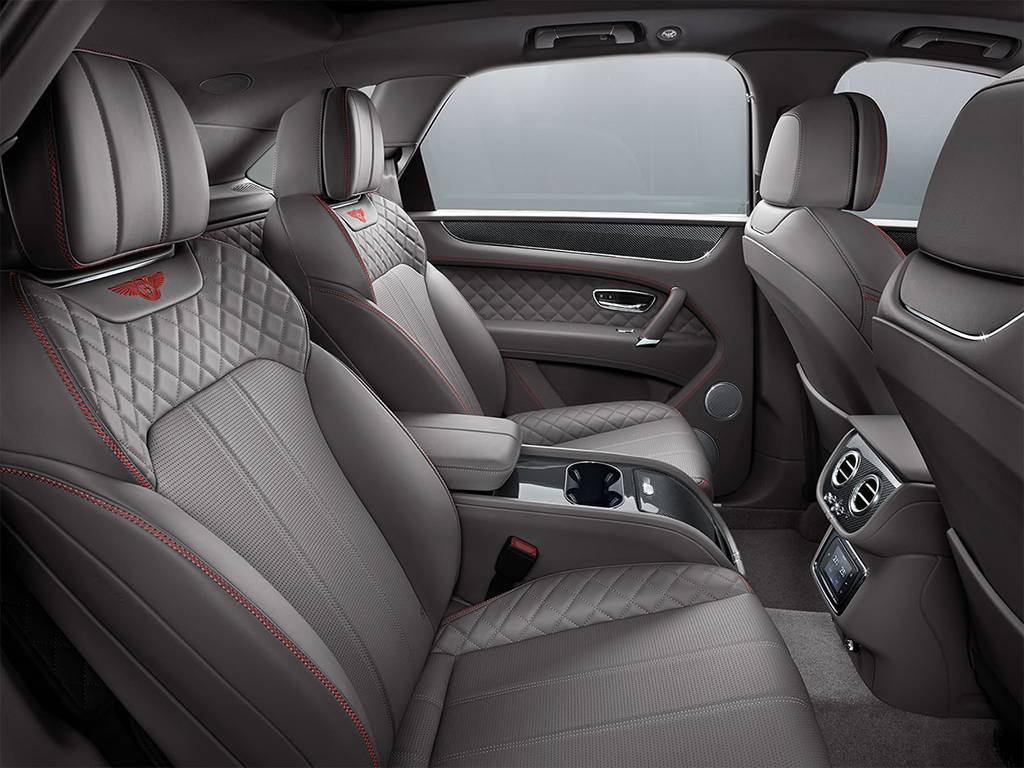 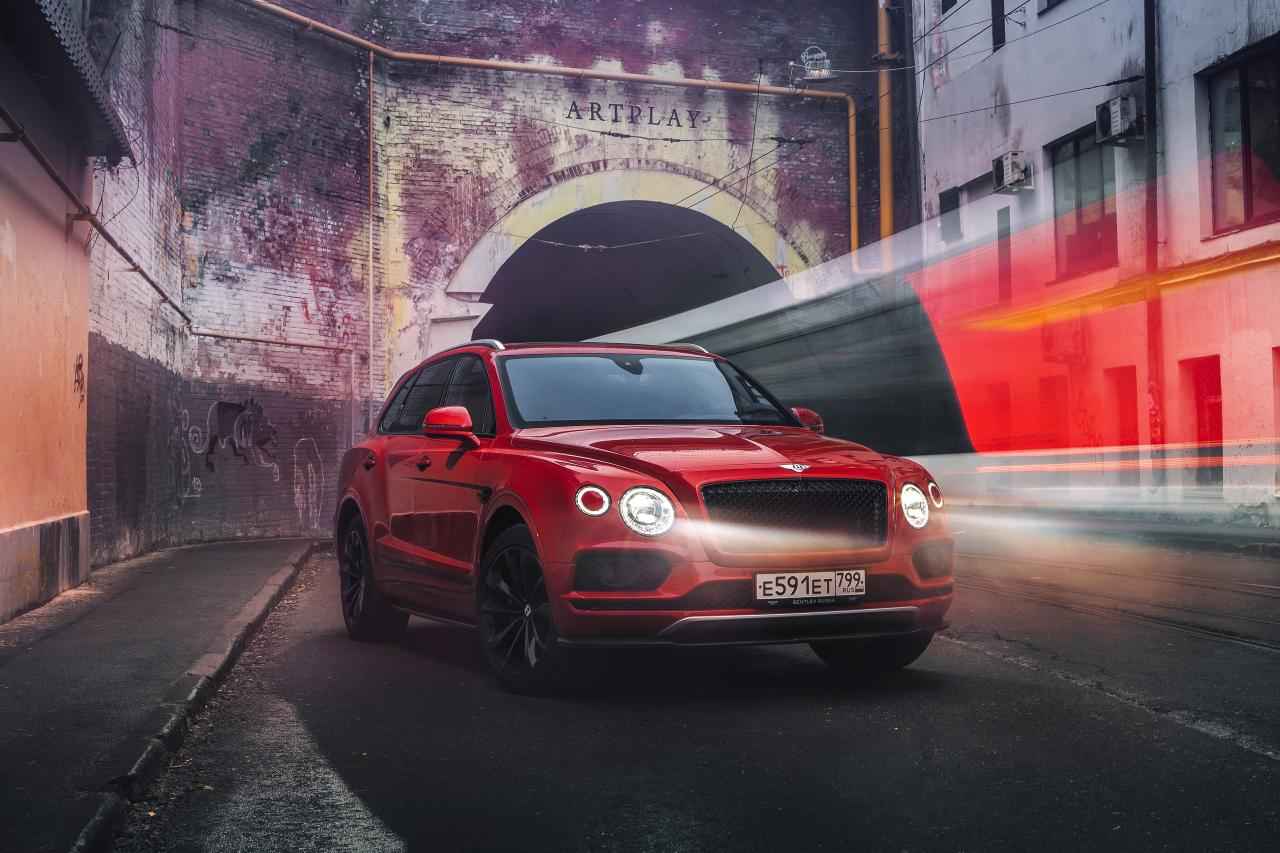 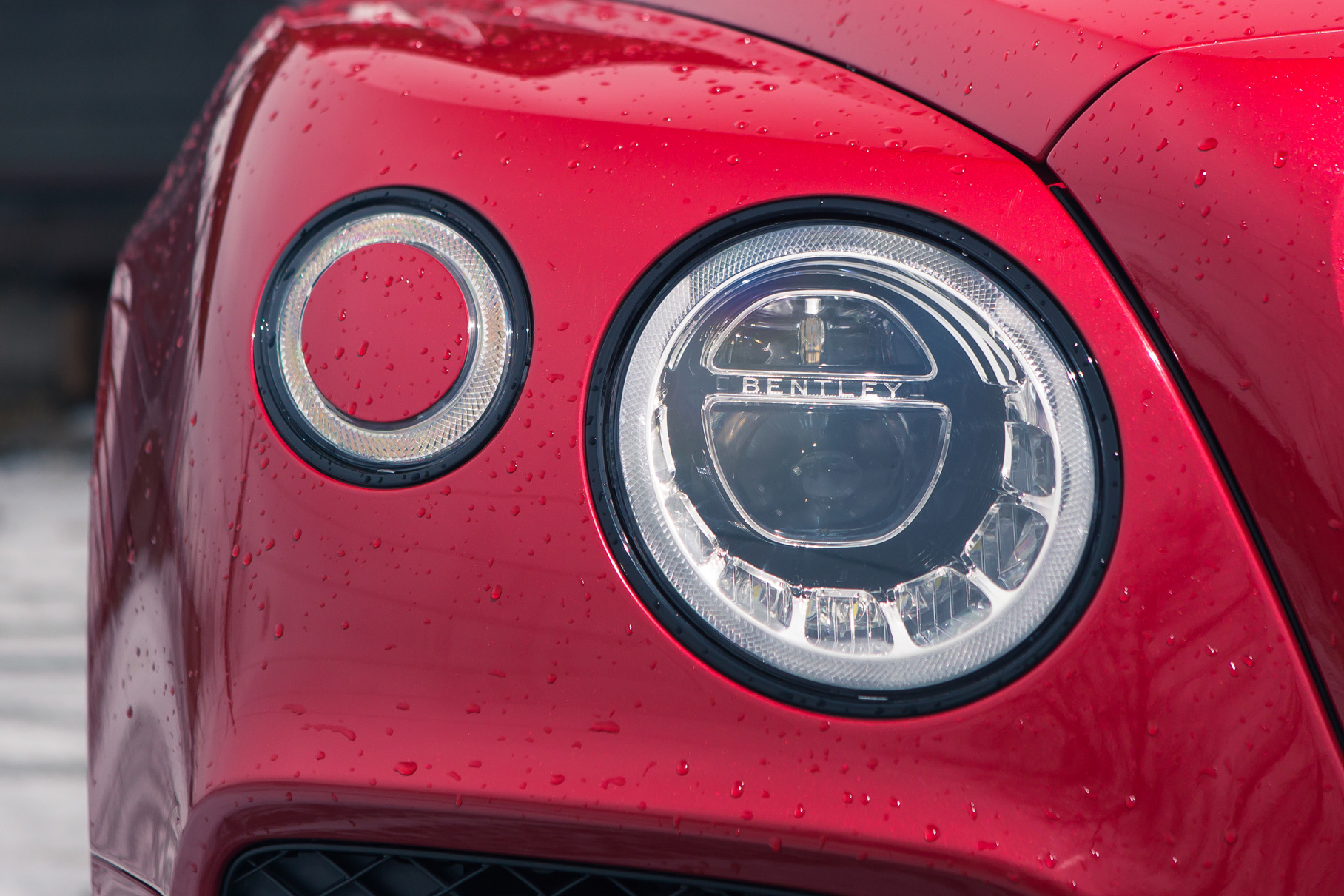 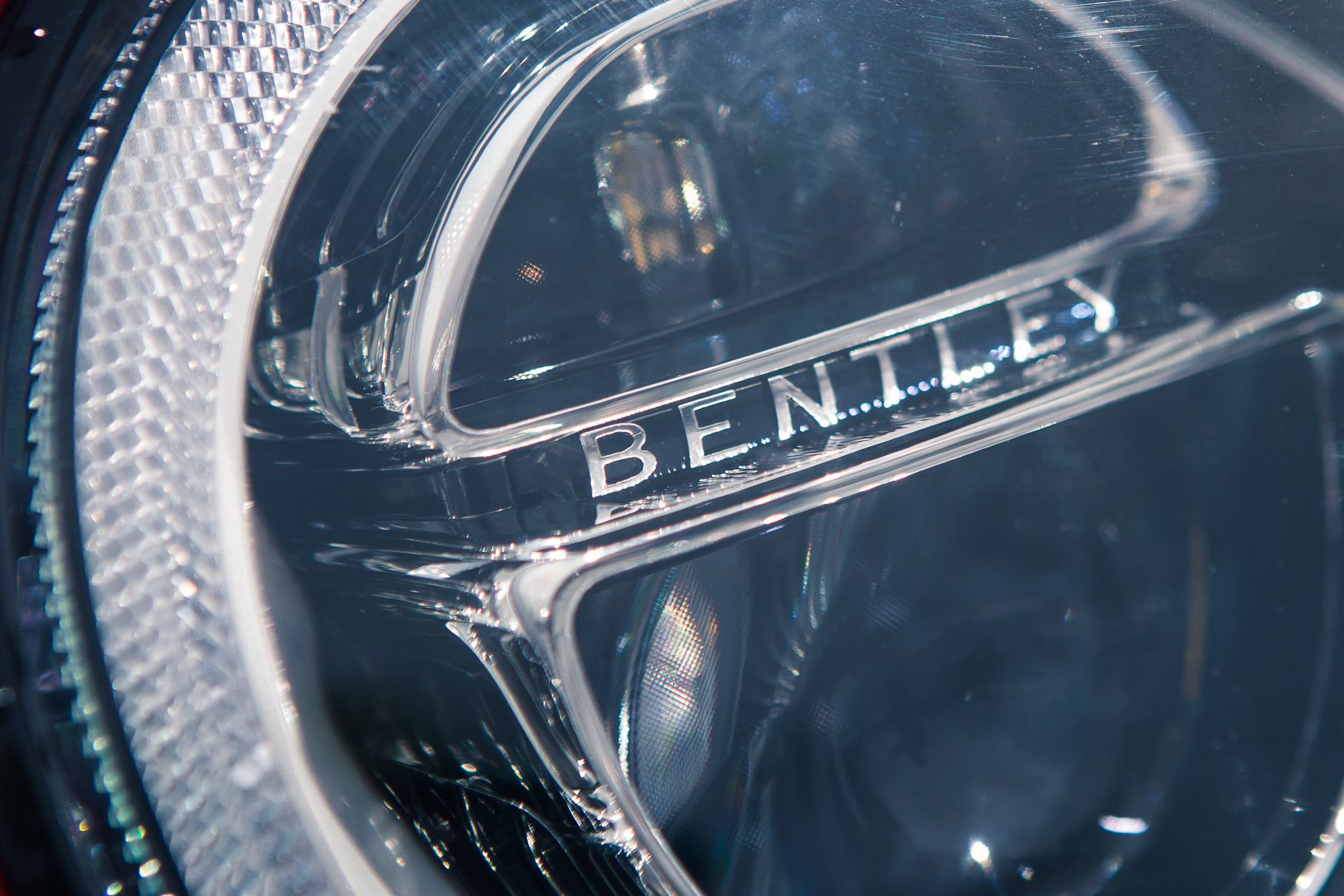 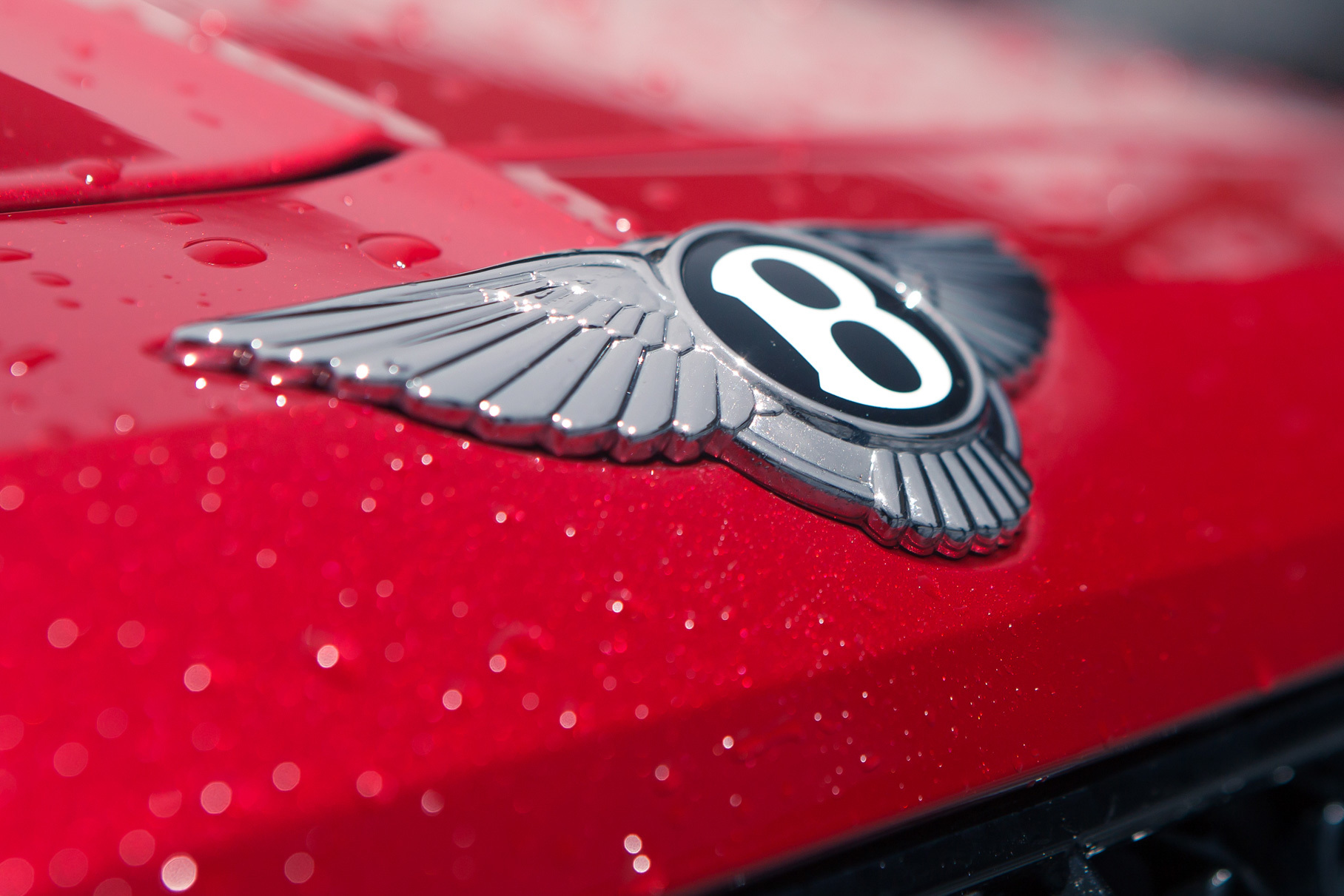 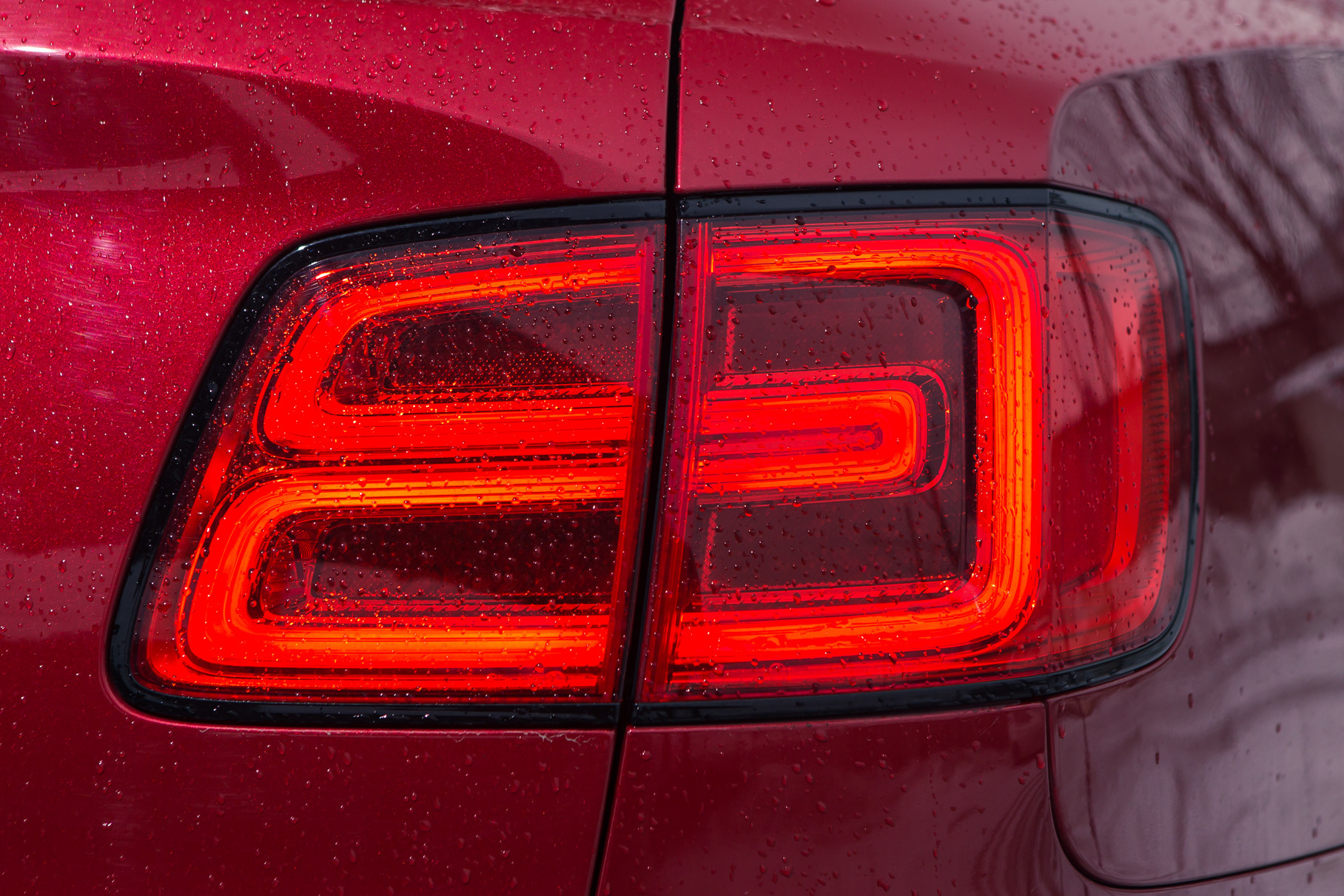 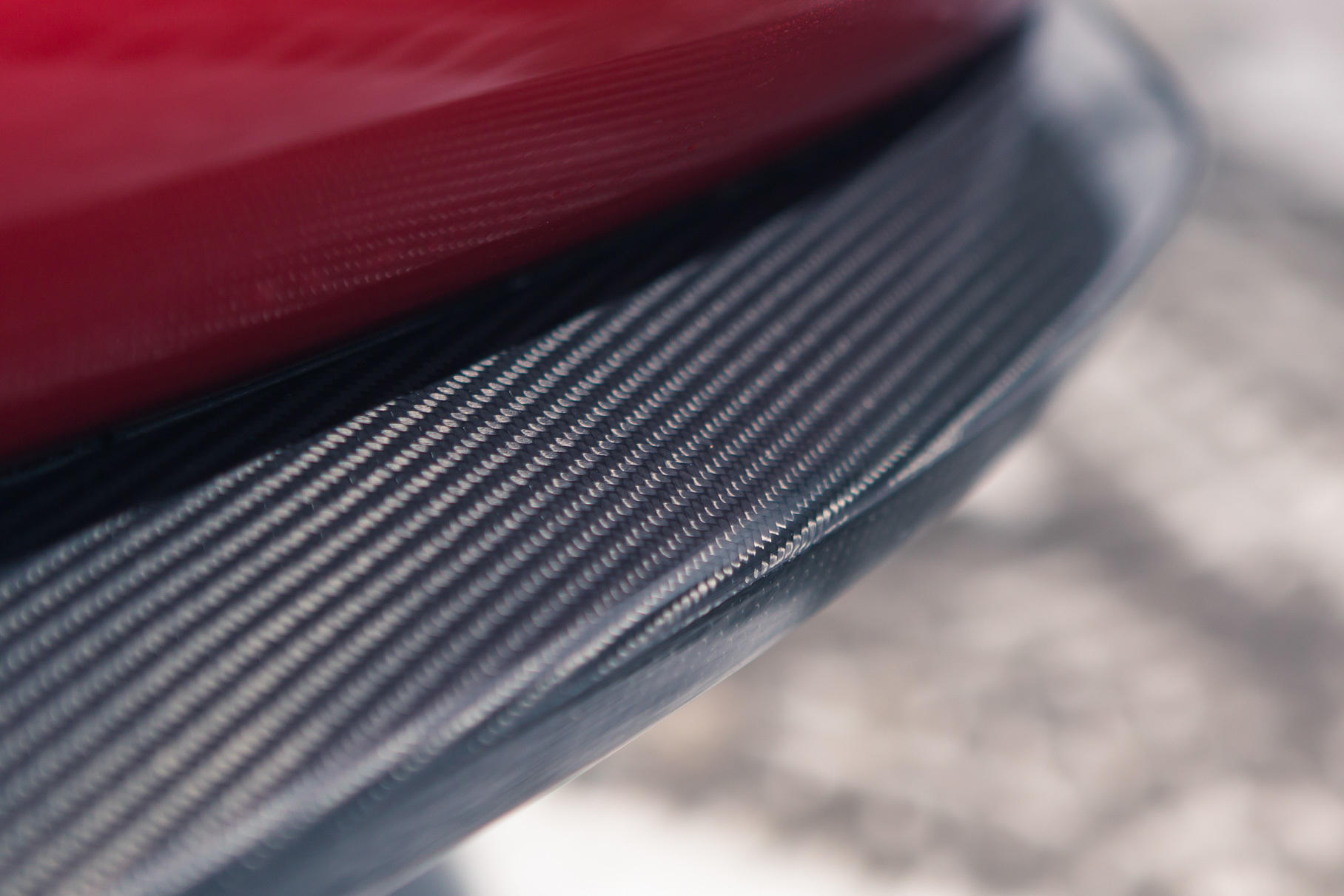 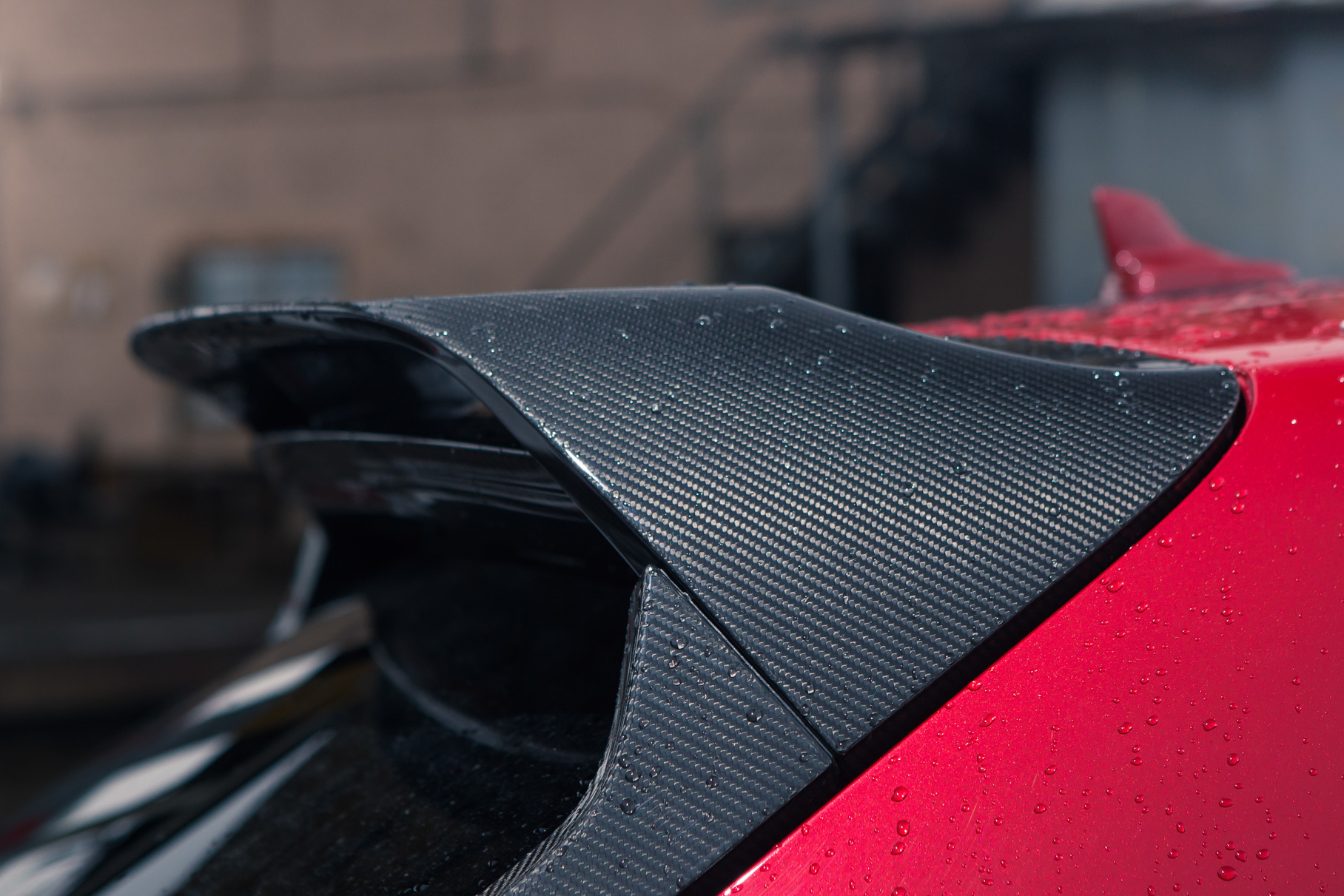 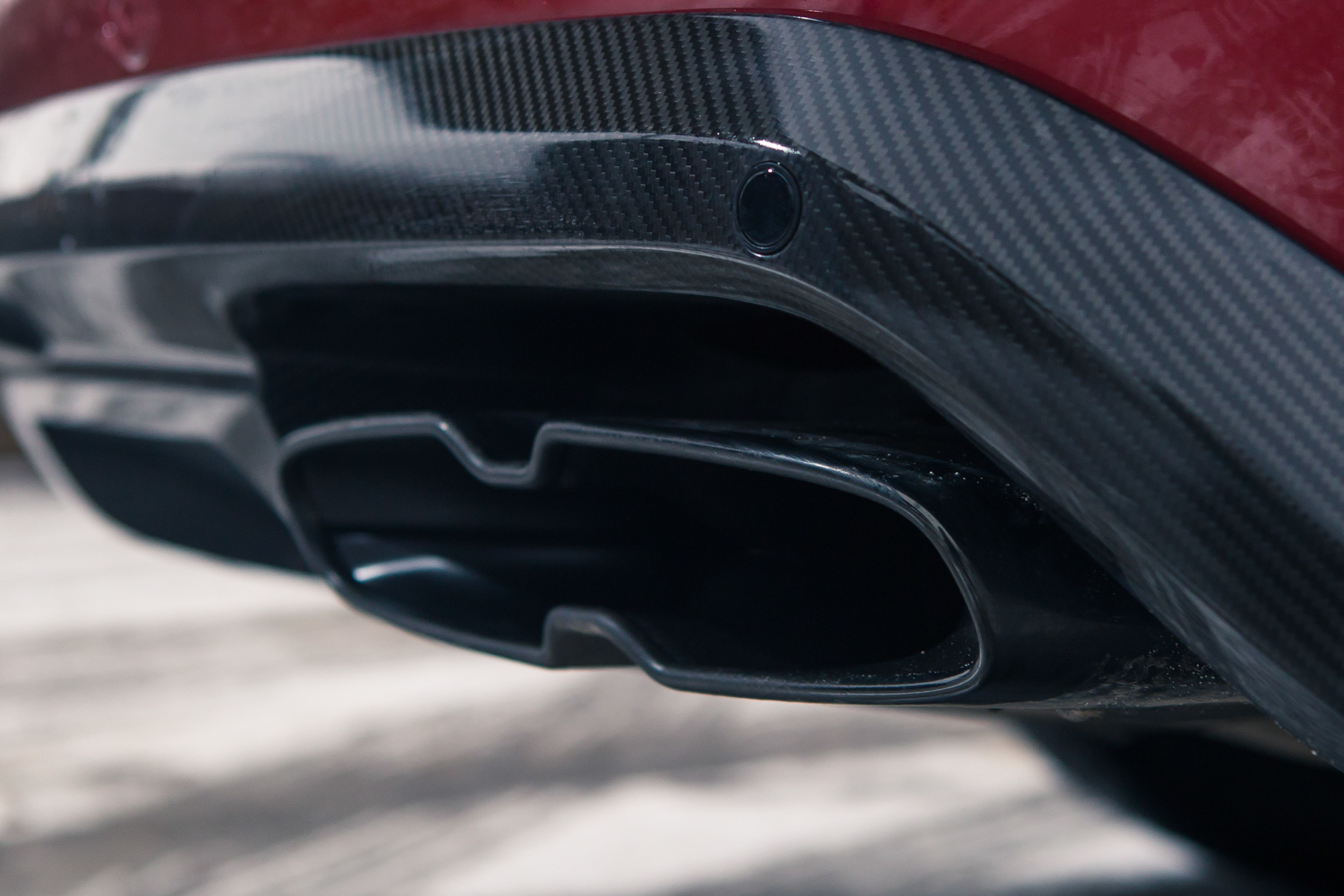 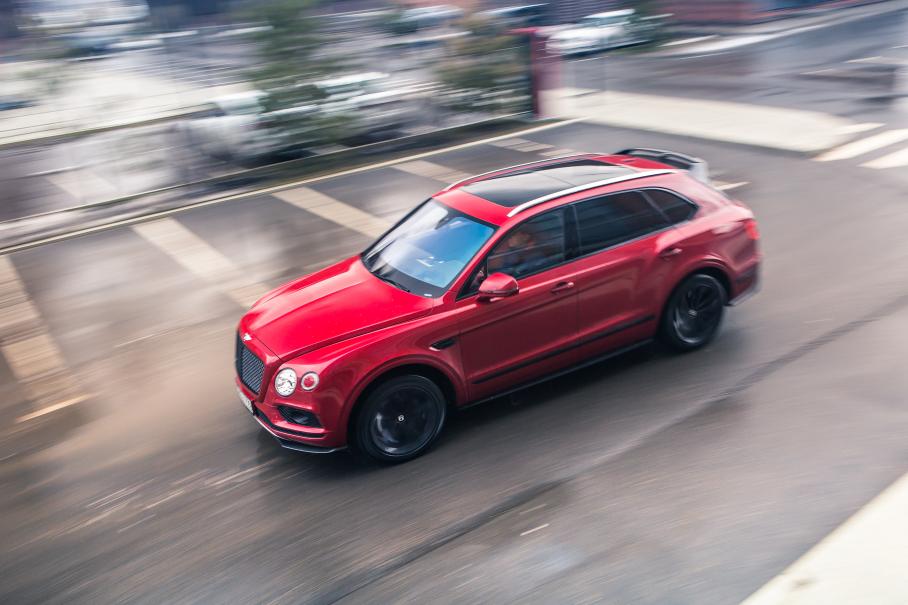 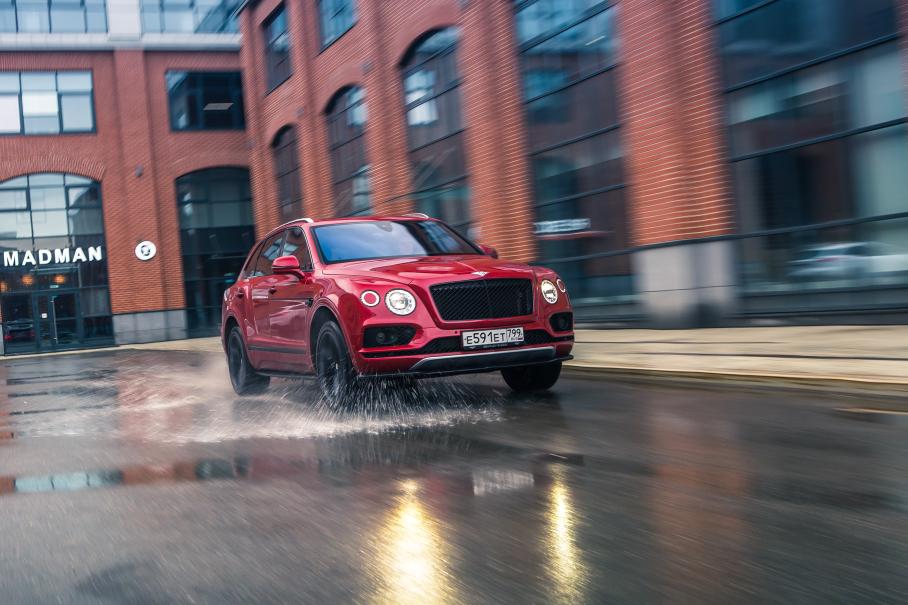 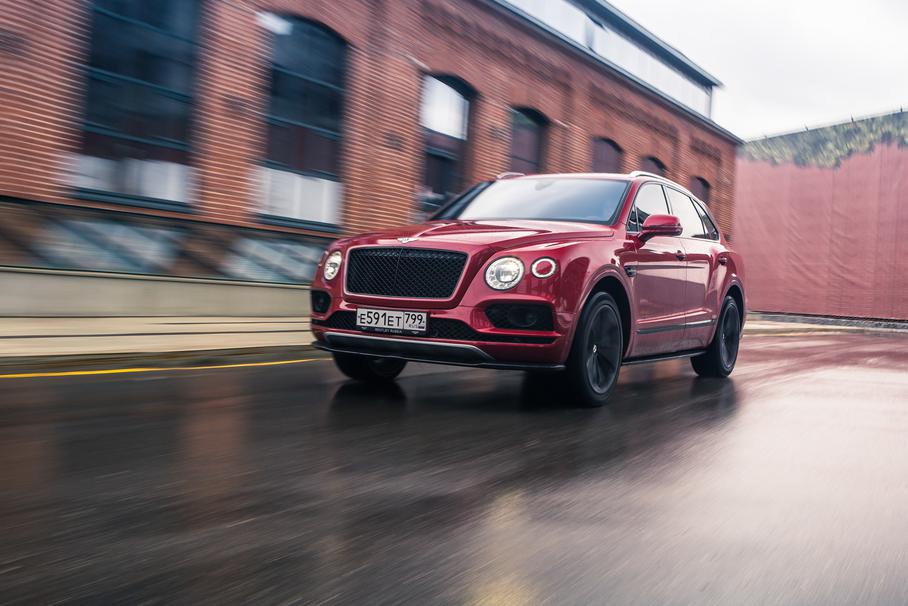 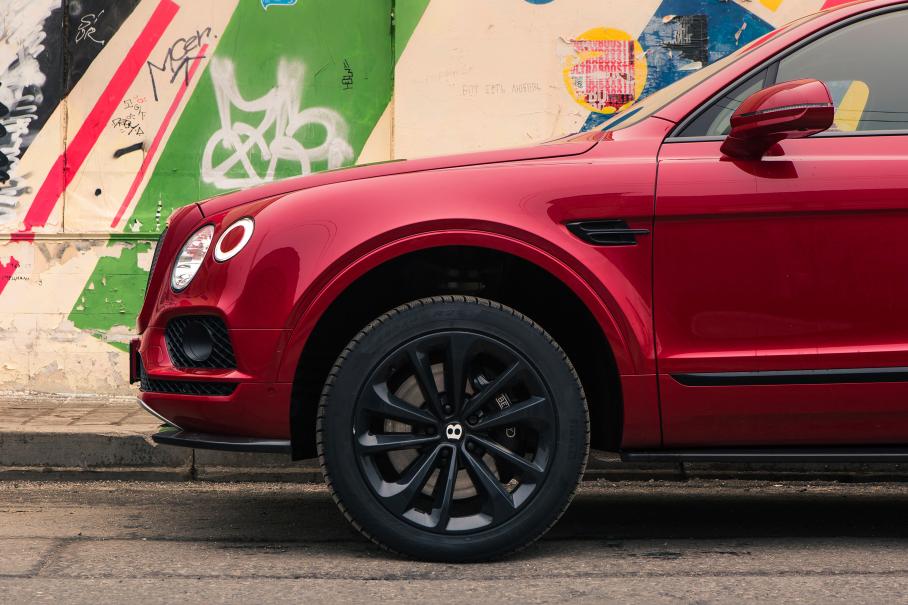 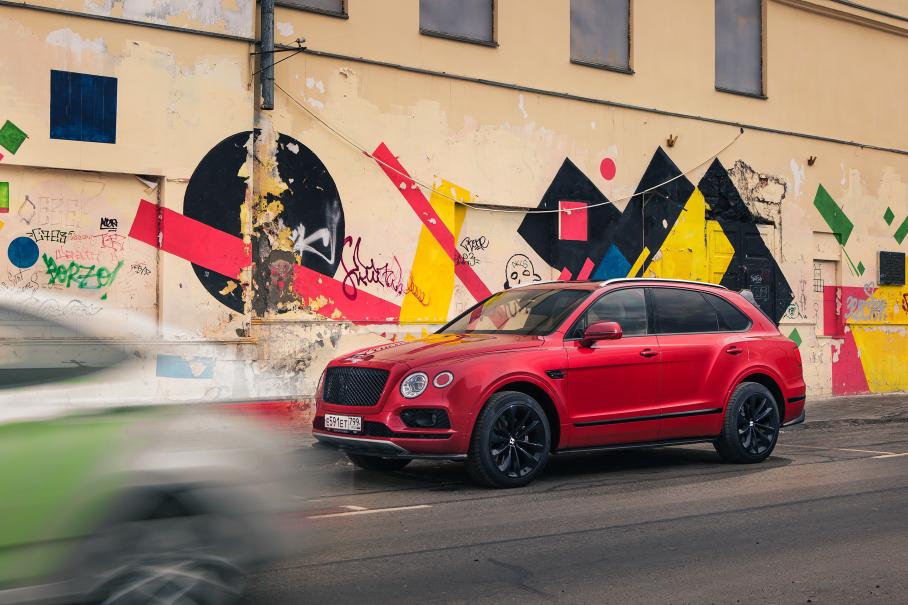